There’s no better time to experience a truly authentic Spain than at Easter, when Semana Santa celebrations roll out across the country. 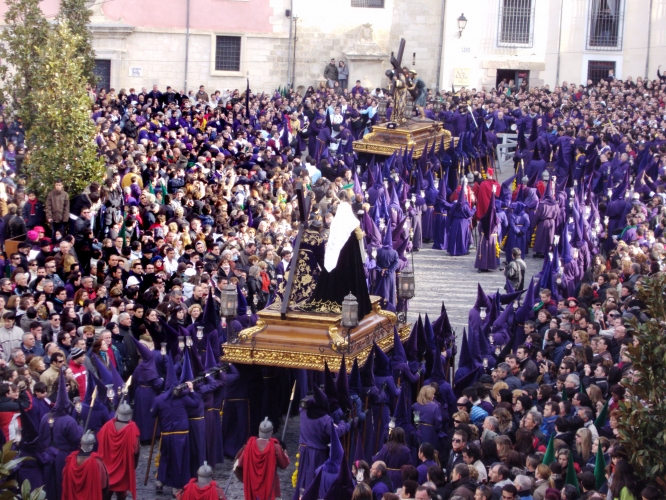 Semana Santa, or Holy Week, is the last week of Lent and undoubtedly one of the country’s most important festivals since it forms an integral part of Spanish identity. Most Spanish cities, towns and villages have their own unique, centuries-old traditions that combine religious and festive events in the lead up to Easter. Religious processions through the streets attract crowds of people, where participants are adorned in distinctive hooded robes and carry processional candles, wooden crosses or other religious sculptures.  Music, art and colour are all important features of the festival but play a distinct role depending on the region.

Some of the grandest processions take place in Andalucia, particularly Malaga and Seville, and involve a whole week of parades and special services. Malaga hosts some of Spain’s livelier processions, where instead of meditation and silence, cheer, applause and spontaneous saetas (flamenco verses) are heard as the tronos (platforms bearing holy images) pass.  The dramatic Easter celebrations in Seville are organised by over 50 different brotherhoods, which carry life-sized pasos (sculptural representations of events from Christ’s Passion) from Seville’s churches to the Cathedral.

The fiesta in Lorca during Semana Santa is also known as ‘the Whites and the Blues’, representing two major brotherhoods that have competed every year since 1855 to see who can stage the most lavish Semana Santa display. Their members parade through the streets in their characteristic robes to the sound of drums and music carrying figures and scenes from the bible and from ancient civilisations. The grand procession includes people dressed up as Roman emperors, Egyptian troops and Roman Gods, as well as chariots, carriages and religious sculptures.

Zamora is one of the most evocative places in the country to watch the hooded processions, where the emotive atmosphere is only broken by the sound of trumpets and drums that accompany the religious figures as they pass. Similarly, Easter celebrations in Cuenca are renowned throughout Spain for the eerie, silent parades through the old town accompanied by the echo of the bugle through the streets.

No other country in the world celebrates Easter as diversely and beautifully as Spain and Semana Santa is a great reflection of the huge cultural wealth that is offered across all four corners of the country.