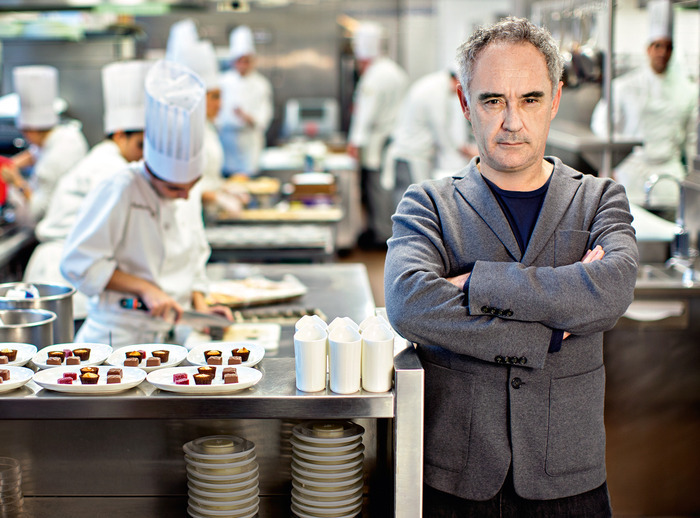 To celebrate the 20th anniversary of How To Spend It magazine, The Financial Times has enlisted the expertise of legendary chef Ferran Adrià, of the famous elBulli restaurant-turned-foundation. Adrià will be co-hosting and collaborating with other chefs in London, New York, Hong Kong and Geneva to create four exclusive dinners.

The dinners will be hosted by editor of How To Spend It magazine, Gillian de Bono and the award-winning chefs from each of the cities joining the collaboration include Jason Atherton from Pollen Street Social and Aberdeen Street Social; Philippe Audonnet from Windows and Hotel d’Angleterre; and Daniel Humm from Eleven Madison Park.

The once in a lifetime experience will see How To Spend It readers met with a champagne reception, before being treated to five courses of elBulli-inspired cuisine. The first dinner will be in London with Jason Atherton at Pollen Street Social on 4 June, followed by Atherton’s second restaurant, Aberdeen Street Social, in central Hong Kong on 16 June. Later in the year Chef Philippe Audonnet will be hosting a dinner in his restaurant, Windows, Hotel d’Angleterre on 4 September, and finally, Chef Daniel Humm, will host readers on 23 October at his restaurant, Eleven Madison Park, in New York. Each dinner will be punctuated by talks from Adrià and the host chef, as well as Gillian de Bono.

Adrià is best known for his 'molecular gastronomy' approach to cooking, and his creative knowledge and expertise are sure to make these events truly special.

For more information or to register, visit www.ft.com/howtospenditdinners

Ferran Adria teams up with @ftlive to celebrate How to Spend it 20th anniversary! @fthtsi @ferranadria #Spain
Newsroom >>

SEVILLE’S CITY COUNCIL HIGHLIGHTS BRITISH AIRWAYS' COMMITMENT TO THE CITY BY CONNECTING SEVILLE WITH ONE OF THE MOST IMPORTANT AIRPORTS IN THE WORLD: LONDON HEATHROW
AS SPAIN ANNOUNCES “BRITS ARE WELCOME”, THE TOURIST OFFICE LAUNCHES PROMOTIONAL VIDEO
THE SPANISH GOVERNMENT, LALIGA AND CEOE WILL PROMOTE SPAIN AS A DESTINATION FOR SAFE SPORT AND TOURISM
TURESPAÑA LAUNCHES ‘#SPAINWILLWAIT’ VIDEO TO CONSOLIDATE TOURISM LOYALTY AND REMIND HOLIDAYMAKERS OF WHAT AWAITS THEM ONCE TRAVEL RESTRICTIONS ARE LIFTED
THE PARADOR DE JAEN REOPENS ITS DOORS FOLLOWING FOUR MILLION EURO RENOVATION
THE RUTA VIA DE LA PLATA NON STOP RETURNS SEEING RIDERS CYCLE THE ENTIRE LENGTH OF SPAIN