Last week saw the launch of a fascinating exhibition detailing Pablo Picasso’s breakthrough year as an artist – 1901 – at The Courtauld Gallery, London. 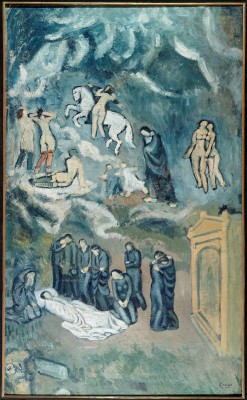 1901 was a momentous and turbulent year for the young Picasso. It was the year he launched his debut 64-piece exhibition in Paris, which led to the start of his remarkable career as one of the greatest artists of the 20th century.

This new exhibition showcases the key pieces from his Vollard exhibition with the prominent dealer Ambroise Vollard, as well as displaying the drastic change in Picasso’s art during the second half of 1901, known as his ‘Blue Period’. During this time, Picasso was suffering due to the suicide of his close friend, and so used this pain as inspiration for what is now classed as some of his first and finest masterpieces.

Together, these pieces demonstrate Picasso’s wish to reinvent and transform the design of modern artists such as Van Gogh, Degas and Toulouse-Lautrec.

Becoming Picasso: Paris 1901 offers the chance to consider in detail the early development of one of the towering figures of 20th century art at a time when he was still just a young Spanish hopeful in Paris.

To see more of the fantastic artwork of Picasso, The Picasso Museums in Barcelona and Malaga display a vast array of his masterpieces, to give an even greater insight into his works. From 30th May, The Picasso Museum in Barcelona will open the ‘Yo Picasso. Self Portraits’ exhibition to explore the various self-portrait techniques he used throughout his career.  From 24th June, the Picasso Museum in Malaga will host a ‘Family Album’ exhibition, depicting 40 of Picasso’s works featuring his family and loved ones, emphasising the importance of the family notion within his creativity.