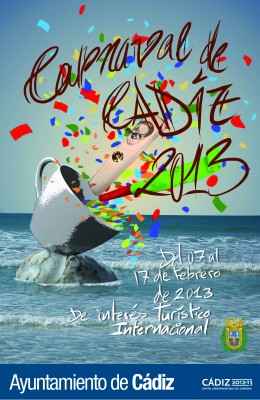 Due to take place between February 7 and 17 this year, Cadiz carnival is a huge street party, with gastronomic events, fireworks, fancy dress, parades and street performances.

The two most important parades are the Gran Cabalgata, on the first Sunday of the feria, and the Cabalgata del Humor, which takes place on the last weekend. Both events attract thousands of dressed up spectators who get involved as they make their way through the old town.

Agrupaciones - choirs of up to 40 singers - and chirigotas - satirical musical groups - also take part in the Fallas Contest, the music festival held in the Gran Teatro Falla ahead of the carnival.

In the run-up to the party they practise their humurous songs, often poking fun at politicians and current affairs, at open air events across the city, creating a sense of anticipation throughout the month.

The Grand Final is then held on the first Friday of carnival and lasts until the following morning.

The Cadiz Carnival is said to have started in the 16th Century as sailors from the port city returned from Genoa and Venice with tales of their carnival celebrations. Now the Cadiz event is so famous it has been declared to be of International Tourist Interest.

Tourists visiting during the colourful street party are encouraged to dress up and join in as much as the locals, although booking accommodation in advance is essential, due to its popularity.