A British tourist visiting Madrid, Spain yesterday on 13 December 2012 has been revealed as the symbolic face of the one billion international tourists travelling in 2012. 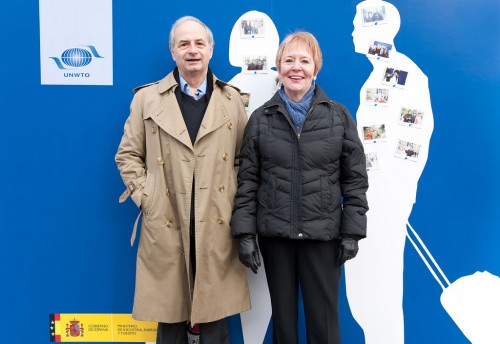 A British tourist visiting Madrid, Spain yesterday on 13 December 2012 has been revealed as the symbolic face of the one billion international tourists travelling in 2012. The holidaymaker was welcomed by the Minister of Industry, Energy and Tourism of Spain, José Manuel Soria, UNWTO Secretary-General, Taleb Rifai, and the Mayor of Madrid, Ana Botella, at an event in Madrid’s Museo del Prado, held to celebrate a record one billion international tourists in 2012. The event, part of the UNWTO One Billion Tourists: One Billion Opportunities campaign, recalled how tourism can create billions of opportunities for growth and development around the world.

“Today, we welcome the symbolic arrival of the one-billionth tourist,” said Mr Rifai. “The one-billionth tourist, Mrs. Dale Sheppard-Floyd from the United Kingdom, is visiting Spain for three days, travelling with Kirker Holidays. During that time she will experience a new culture, meet new people, support the local economy and help to sustain the jobs of waiters, tour guides and many more working in tourism, as well as of all those whose jobs are indirectly linked to tourism such as taxi drivers, food producers or shop attendees. If we multiply this impact by one billion, we begin to understand the enormous significance of reaching this milestone.”

The celebration was held in Madrid’s Museo del Prado, the city’s most visited tourism attraction, in the presence of UNWTO representatives and Spanish tourism and private sector officials, as well as many of the museum’s daily visitors from around the world. As it is impossible to know exactly where the one-billionth tourist arrived, many countries celebrated the occasion by also welcoming tourists arriving on 13 December.

The Minister of Industry, Energy and Tourism of Spain, José Manuel Soria, thanked UNWTO for choosing Spain to celebrate the official celebrations of the international campaign and stressed that “Spain is one of the world’s leading tourism destinations, where the sector represents 11% of the country’s economy.” The Minister further highlighted the importance of tourism in economic development and job creation.

Minister José Manuel Soria noted that Spain was expected to reach a record 58 million international tourist arrivals in 2012, alongside an increase in tourist receipts. The Minister recalled Spain’s intention to increase and retain its large number of tourists who visit the country to experience its diverse tourism attractions.

“Madrid City Council is happy to be hosting this symbolic act, since it strengthens the reputation of the city as one of the world’s great tourism destinations. Tourism is one of the principal drivers of Madrid’s economy. Indeed, in its current strategic plan, the Madrid Visitors & Convention Bureau aims to transform tourism into a pillar of wealth and employment creation for the city,” said the Mayor of Madrid, Ana Botella.

The event was held as part of the UNWTO campaign, One Billion Tourists: One Billion Opportunities, calling on tourists to make a difference when traveling abroad and recalling the positive impact that even the smallest actions can have if multiplied by one billion.

Outside the Prado, as well as in Madrid’s famous Plaza Mayor, tourists visiting the city became Faces of the One Billion by adding their photos to a giant mural, reminding tourists that they are part of the one billion and that all their actions count.