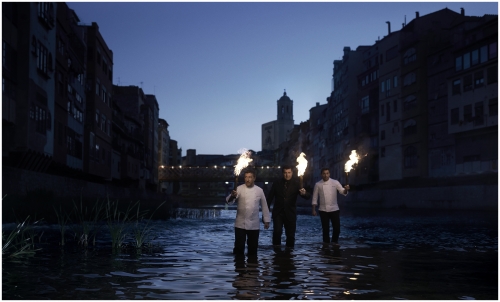 Avant-garde eatery El Celler de Can Roca in Girona, Spain, was granted the No. 1 spot on Restaurant Magazine's annual ranking of the world's 50 best restaurants during a ceremony in London on Monday.

The three Michelin-starred El Celler de Can Roca run by the three Roca brothers – Josep, Jordi and Joan, took the number one spot from innovative Danish restaurant Noma that has held the honour for the past three years after claiming the title from Spanish restaurant elBulli in 2010.

Ranked No. 2 in 2011 and 2012, El Celler opened in 1986 and has since been known for dishes that blend innovative cooking techniques with traditional ingredients, such as lobster parmentier with black trumpets and Iberian suckling pig with pepper sauce and garlic and quince terrine.

Somni, which translates to dream, will be a dynamic multi-sensory private dining experience with food and drink, video, robots, music and card games, as reported in the Spanish newspaper El País.

The brothers first announced the project in June last year with food website FineDiningLovers.com revealing that the restaurant would be a special igloo-shaped venue in El Celler’s basement.

Other Spanish eateries included in this year's 50 best list were Mugaritz at No.4, Arzak at No.8, Quique Dacosta at No. 26 and Asador Etxebarri at No. 44.