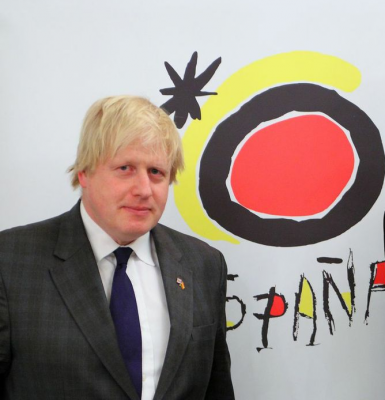 Last Monday 11th March, the Anglo-Spanish Society hosted a wonderful black-tie gala dinner at the RAC Club, with Mayor of London, Boris Johnson as their special guest of honour and key speaker for the evening.

Boris, who has now been touted as one of Spain’s non-official ambassadors after posing for photos with the iconic Spanish Tourist Board logo, entertained the audience with stories of his travels around Spain in his youth. The Major of London concluded his spirited speech by jokingly suggesting that Spain´s relationship with the UK is so good that Spain should consider leaving the euro and joining the pound…much to the humour of the Spanish attendees.

The Anglo-Spanish Society aims to create understanding and friendship between Britain and Spain and does so by their great knowledge of culture, history and customs in Spain and the UK.

The event, which was fully booked over a month in advance, also welcomed His Excellency The Spanish Ambassador Federico Trillo Figueroa, as well as various other movers and shakers with a special interest in relations between Spain and the UK.

The attendees  bid  farewell to Dame Denise Holt, who has served as Chairman of the Society for the last three years and will be succeeded by well know Anglo-Spanish author and journalist Jimmy Burns. The evening was sponsored by The Spanish Tourist Office, as well as corporate sponsors Santander Universities, BBVA UK, Ferrovial and Telefonica and was a huge success, with all profits going towards one of the Society’s charitable causes – the outstanding scholarship scheme for postgraduate students.