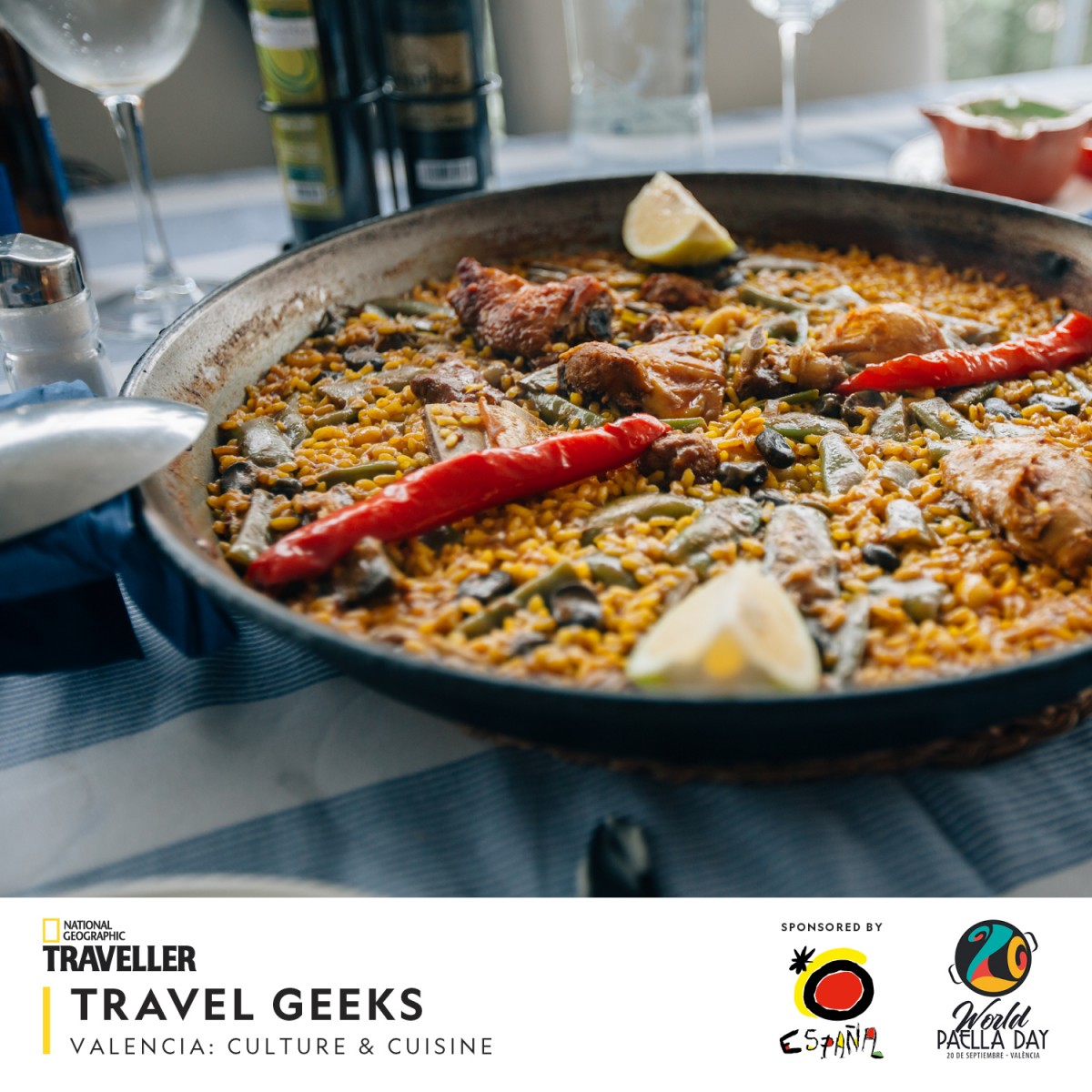 We are delighted to invite you to join a free event with National Geographic Traveller Travel Geeks, ‘Valencia: Culture and Cuisine’ which will take place on Thursday 17th September from 6:00pm to 7:00pm (BST) ahead of World Paella Day on 20th September. National Geographic Traveller Travel Geeks event has been taking place for over six years and follow the format whereby a panel of experts are invited to share their knowledge and love of food and travel; in this instance of Valencia and its world-famous paella.

The southern Spanish region of Valencia is home to extraordinary architecture and coastlines. Lovers of paella probably already know that Valencia is the birthplace of Spain's national dish; the flavoursome rice concoction is the centrepiece of any traditional family gathering, and inextricably linked with the ancient port city and surrounding region. What better way to find out about paella's history than with an expert chef showing you how to make the Valencian staple in your own home? National Geographic Traveller will even send you a list of the ingredients you'll need to give it a go — just in time to celebrate World Paella Day a few days later on 20 September. World Paella Day is a day where Valencians share their great dish with the rest of the world, celebrating a meal of humble Valencian origin which has transcended borders to become immensely popular across the globe.

Of course, Valencia is more than just paella — there’s incredible food and wine to be found everywhere in the region. The expert panel will discuss and debate the best dishes made from the finest produce from the surrounding market gardens, how to enjoy Valencian wine in Spain and at home, and how to recreate the tastes of Valencia in your own kitchen.

Soaking up the city

Spain’s third-largest city, Valencia is known for its striking architecture and lively, welcoming atmosphere. While travel might be restricted at the moment, make time to plan an amazing trip with the help of the panellists, who’ll discuss their favourite places and secret spots — from the futuristic City of Arts and Sciences, and the sights and smells of the dazzling, art nouveau Central Market of Valencie to the lush Turia Gardens and the colourful tiles of the fishermen’s quarter, Cabanyal-Canyamelar.

Looking beyond the city, the wider Valencia region is made up of three provinces: Castellon in the north, Valencia in the middle, and Alicante in the south. Our experts will be revealing their must-see spots, from the most beautiful beaches to spectacular ravines via medieval villages and gothic palaces.

The World Paella Day Cup is being launched to celebrate World Paella Day in its more digital version for 2020. This is an international competition that will see eight different chefs from around the world go head-to-head to reach the grand final and be crowned the champion in its inaugural year. The quarter final stages have now been announced and will see the chefs judged on their paella making skills which will be judged by a judging panel. The winners will advance to the next round in the hopes they can reach the final.

To find out more about Spain as a visitor destination, please visit www.spain.info or contact Spain@wearelotus.co.uk