Tune in virtually on 12 September to celebrate Spain's arts & heritage 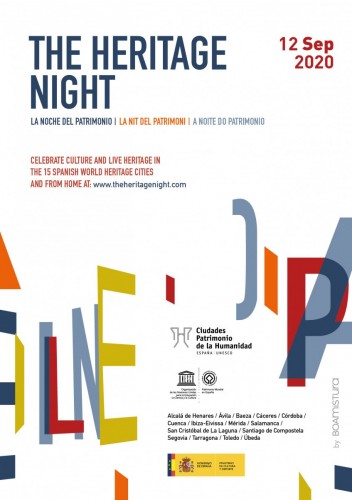 La Noche Del Patrimonio (The Heritage Night) is a unique world-class cultural event taking place simultaneously in fifteen Spanish World Heritage Cities. Every September, for one night only, UNESCO heritage sites and local culture are being celebrated throughout Spain with spectacular performances which are open to the public free of charge.

World Heritage sites open their doors with extended late night opening hours to delight locals and visitors with special guided tours, visual art exhibitions, music and theatre performances. Streets and squares are transformed into spectacular event venues thanks to performances of some of the most acclaimed international artists. As a result, the entire city centres of all the fifteen cities come to life for La Noche Del Patrimonio, guaranteeing a memorable night that truly holds something for everyone.

The Spanish World Heritage Cities Group has announced that the third edition of The Heritage Night will take place on Saturday, 12 September 2020. During the event, visitors can experience the the best of the cities' cultural offering. This year's festival will be also avaialble online for viewers around the world as fifteen special perfromances of many well-recognised Spanish artists during the Dance Festival, Escena Patrimonio, will be streamed live at www.theheritagenight.com.

For further information on Spain as a visitor destination, please visit www.spain.info or email spain@wearelotus.co.uk.

Tune in on 12 September to celebrate Spain's "Noche del Patrimonio" where 15 Spanish World Heritage cities come together to give an incredible display of art & culture https://lanochedelpatrimonio.com/home-english/ #spainculturalheritage
Newsroom >>