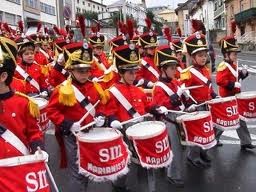 San Sebastián may be best known as a summer holiday destination, but those lucky enough to be in the Basque town in January can enjoy a loud celebration for its patron saint the Donostia of San Sebastián.

La Tamborrada, as the celebration is called, takes place for 24 hours from midnight between January 19 and 20.
Beginning in the Plaza de la Constitución with the raising of a flag, companies of uniformed marchers gather before parading through the streets of the Old Town playing the drums.

In keeping with San Sebastián’s culinary fame, each group represents the one of the town’s different gastronomic societies.

The festival is said to have stated in 1720 and special drum compositions were created by composer Raimundo Sarriegui in 1861 and aptly named the ‘March of San Sebastian’.

The noise continues throughout the night, with a pause at dawn for churros – deep-fried doughnut batter in served in long fingers – and brandy to warm up.