SPAIN GETS READY FOR FIESTA SEASON! 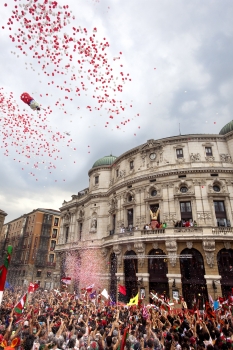 August is almost upon us and anyone planning to visit Spain next month may find themselves immersed in some of the most fun and wacky fiestas on earth. Most towns hold their own fiestas, and cities like Madrid have different neighbourhood fiestas each week, so there is always something exciting going on.

Here’s a selection of some of the top August fiestas, from the north to the south of Spain:

From 4-31 August, visitors to Santander can enjoy Cantabria’s biggest cultural event. You’ll find music, art, dance and theatre taking place everywhere from the most grand gardens and palaces to churches and even caves!

The parties in Ibiza aren’t just inside the clubs and between 5 and 15 August everyone will be celebrating, with ten days of local fiestas which include fireworks, sporting competitions and a special tribute to the island’s seafaring heritage.

Head to Huesca in Aragón between 9-15 August for a week of fiestas celebrating the city’s Patron Saint, San Lorenzo. Catch traditional music and dancing, parties, religious processions and activities for visitors of all ages this week.

From 9-16 August San Sebastián will be awash with merrymakers, free concerts and theatre, pop up bars across the city, fireworks and fun throughout both day and night, while 16-24 August it will be Bilbao’s turn.

10 August sees the annual Octopus Festival take place in the Galician town of O Carballiño and is the perfect moment to sample the tasty local delicacy, Pulpo Gallego. Around 25,000 kilos of octopus will be cooked up – all washed down with Ribeiro wine!

Between 16 and 23 August Málaga is the place to be, with events, processions and fireworks taking place all over the city. The central point of the Feria is the El Real fairground area, where there’s a definite festival vibe, but you’ll also find plenty of action on the beach and at the port, as well as within the city’s historic winding streets.

If you’ve overindulged with the rest of Spain over the fiesta period, head over to the island of La Palma between 22-24 August for the walking festival. Tours are led in Spanish, English or German and follow different routes across the island, from the “rum route” and the “cheese route”, to the less calorific “Sistine Chapel of the Atlantic”. As you make your way around on foot, aside from the beautiful scenery you’ll be entertained with live music and traditional celebrations.

If you’ve never tried delicious Asturian cider you’re in for a treat at this annual celebration of the region’s favourite tipple between 26 and 31 August. The festival sees thousands of cider fans head to Gijón’s beach where 30,000 litres of cider are given out, as well as cider pouring competitions (it’s an art and much harder than it sounds!) and festivities across the city.

This famous and totally off-the-wall celebration needs little introduction. 27 August is when the town of Buñol near Valencia launches tons of tomatoes on top of eager partygoers and plays host to the world’s biggest tomato fight.

Heading to #Spain this #August? It's #fiesta season and you're in for a treat! #party #festival #summer
Newsroom >>